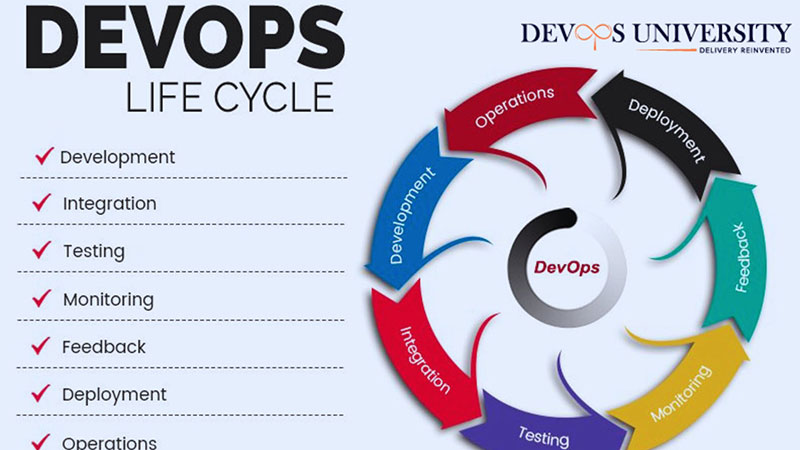 DevOps is a shorthand term that combines “development” and “operations.” It entails performing the various tasks of application development in a specific order. DevOps is a broad term for a combination of software development and IT operations. The DevOps approach adopts continuous innovation, agility, and scalability to build, test, consume, and develop software products. It fosters an environment of experimentation, feedback, and constant learning to reinvent products, services, and processes.

The foremost phase of the DevOps lifecycle involves planning and software development. Understanding the project’s vision and envisioning software based on those perceptions is part of the planning process. Planning does not necessitate the use of any practical tools, but maintaining the code requires using various devices. Creating the source code for an application begins with selecting a programming language. JavaScript, C/C++, and Python are popular programming languages in DevOps.

After development, the continuous integration process begins automatically. It consists of several steps, such as planning tests for the next phase and understanding the code to produce the desired outcome specified in the initial project documentation. Continuous integration is a seamless process in DevOps that efficiently leads to the next phase. The continuous integration of this new code into the existing source code aids in reflecting the changes that end users will encounter with the updated code. As a result, Jenkins is widely used as a dependable DevOps tool for obtaining updated source code and constructing builds in.exe format. These transitions are seamless, and the updated code is packaged and sent to the next phase, either the production or testing server.

In DevOps, the testing process examines the actual use of an application. Beta testers produce results while ensuring that the application can be used in a live environment. The testing process provides more information about various aspects of an application, then sent to the development process to improve the application. Some developers perform continuous testing before the continuous integration phase. This phase in the DevOps lifecycle can be repositioned around the continuous integration phase based on changes to the application code. The developed software is constantly tested for bugs here. Docker containers are used to simulate a test environment. Developers save time and effort by using automated testing instead of manual testing.

Monitoring is a phase that involves all operational aspects of the DevOps process, in which important information about software usage is recorded and carefully processed to identify trends and problem areas. Typically, monitoring is built into the software application’s operational capabilities. When in a continuous use position, it may appear in the form of documentation files or may generate large-scale data about the application parameters. This phase resolves system errors such as servers not being reachable, low memory, etc. In addition, it ensures the service’s security and availability.

The two critical phases that ensure consistent improvements in the application code are continuous testing and continuous integration. Continuous feedback is a unique phase in which these improvements are evaluated. Developers can predict how these changes will affect the final product. Most importantly, customers who tested these applications can share their experiences during this phase. In most cases, this stage of the DevOps lifecycle marks a watershed moment in the application development process.

The feedback is quickly assessed, and developers get to work on the new changes. Soon after, there is a positive response in customer feedback, paving the way for new versions of the software application.

The deployment process is carried out so that any changes made to the code should not affect the operation of a high-traffic website. The new code is continuously deployed, and configuration management tools are critical in executing tasks frequently and quickly. Chef, Puppet, Ansible, and SaltStack are some popular tools used during this phase. Traditionally, the phase of continuous deployment comes before the phase of continuous monitoring. However, developers ensure that this phase is always active in the DevOps lifecycle, particularly after the application goes live and begins receiving a high traffic volume. Containerization tools are also crucial during the deployment phase. Vagrant and Docker are two popular tools for this purpose. These tools aid in maintaining consistency across the development, staging, testing, and production environments. They also help in the soft scaling up and scaling down of instances.

The final phase of the DevOps lifecycle is the shortest and least complicated. The goal of continuous operation is to automate the release of the application and subsequent updates. As a result, continuous operations have shorter development cycles, allowing developers to continually accelerate the application’s time-to-market. In addition, all DevOps operations are based on continuity with complete automation of the release process, allowing the organization to accelerate the overall time to market continuously.

DevOps is primarily used to develop applications for e-commerce websites, cloud-native applications, and other large distributed platforms. DevOps describes an agile relationship between development and operations. The DevOps lifecycle is defined as phases that include continuous software development, integration, testing, deployment, and monitoring. A competent DevOps lifecycle is required to build superior quality software through the system.