What is Configuration Management?

The process of standardizing and administering resource configurations and entire IT infrastructure in an automated way is Configuration Management. It is the concept where you put your server infrastructure as code.

It helps to systematically manage, organize, and control the changes in the documents, codes and other entities during the SDLC.

It aims to control costs and work effort involved in making changes to the software system.

Push versus Pull based CM

Configuration Management tools implement one (or both) of these models of management. Push-based CM and Pull-based CM are the ways in which a CM tool performs actions, like installing packages or writing files. 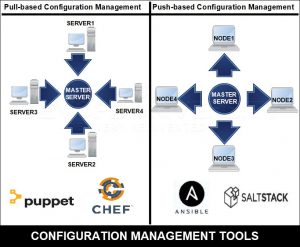 Some advantages of using configuration management tools are:

There are various types of configuration management tools available, each having specific features that make them apt for certain scenarios more than the other. 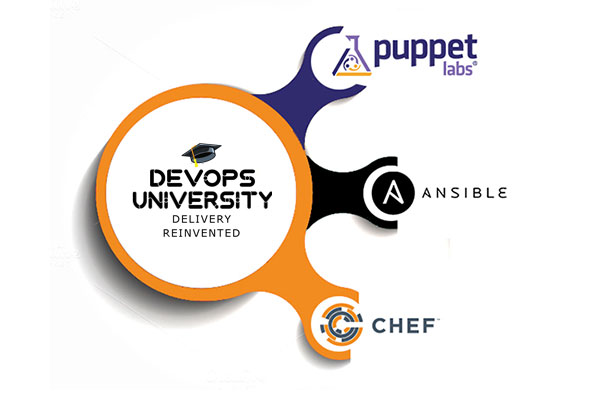 Below is a comparison among the most popular ones available in the market: 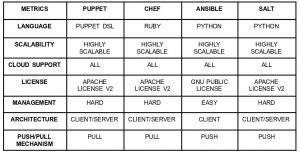 Ansible is a powerful tool by RedHat which can be setup very easily. It is used for IT Configuration Management, Deployment & Orchestration.

It is an extremely simple IT automation engine used to automate many IT processes like cloud provisioning, configuration management, application deployment and intra-service orchestration.

It helps improve the scalability, consistency and reliability of your IT environment.

Even if you don’t know the particular commands to accomplish a particular task, you can still work on Ansible by just specifying what state you want the system to be in and Ansible will take care of the rest. 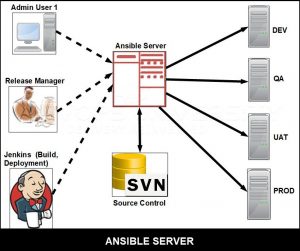 What all Ansible can do?

Provisioning: Ansible is used to provision the basic infrastructure, install services etc. After the underlying environment is provisioned, Ansible can also be used to provision resources, services, and cloud applications.

Configuration Management: It establishes and maintains consistency of the product performance by recording and updating detailed information which describes an enterprise’s hardware and software.

Application Deployment: You can make DevOps easier by automating the deployment of internally developed applications to your production systems. There are a number of steps that needs to be performed to deploy the engine, which Ansible does for you:

Security and Compliance: When you define your security policy in Ansible, site-wide security policies can be integrated into other automated processes. It means that, you need to configure your security details once in your control machine and it will be embedded in all other nodes automatically. Moreover, all the credentials (admin users ids & passwords) that are stored within Ansible are not retrievable in plain-text by any user.

So why would you choose Ansible over the other IT automation tools available in market like Puppet and Chef? Well, the features below might help you reach an answer.

Simple: A very simple syntax written in YAML called playbooks is used by Ansible.
YAML is a legible data serialization language. No special coding skills are required and even people who do not know what is Ansible can likely read a playbook and understand what is happening. Installation is simple too. Simplicity ensures a quick start.

Agentless: Ansible is completely agentless. There are no agents/software or additional firewall ports that you need to install on the client systems or hosts which you want to automate. You don’t have to set up a management infrastructure separately like managing your entire systems, network and storage.

Powerful & Flexible: Ansible provides you with hundreds of modules to manage the infrastructure, networks, operating systems and services. Ansible’s capabilities all put together, allow you to organize and coordinate the entire application environment regardless of the deployment location.

Efficient: No extra software on your servers means more resources available for your applications. Ansible introduces modules which act as basic building blocks for your software. So, you can even customize as per your needs.

The Ansible automation engine has a direct connection with those who create playbooks for execution of the Ansible Automation engine. It also interacts with the cloud services and Configuration Management Database (CMDB). 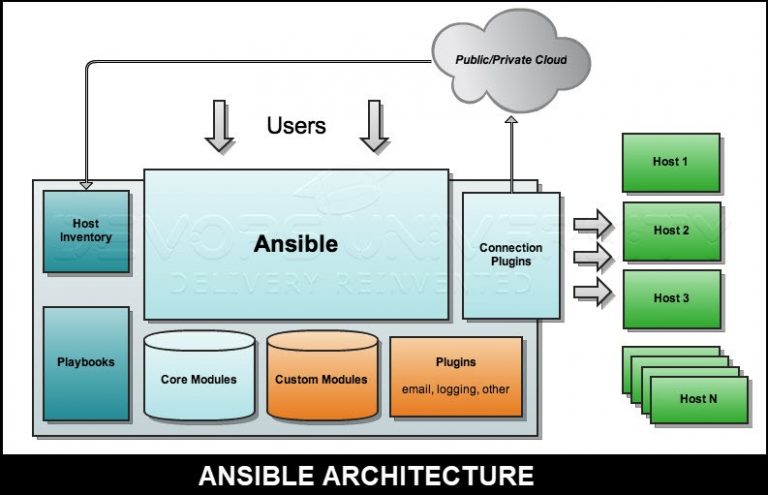 The Ansible Automation engine consists of:

Some more important pieces in Ansible Architecture are explained below:

Hosts: The hosts are just node systems which automates Ansible. It can be a Windows, Linux or a Redhat machine.

Playbooks: All the automation is defined here, through tasks using YAML format. Playbooks will be discussed in detail in the upcoming sections.

CMDB: It holds data related to configuration items, as well as to describe relationships between such IT assets.

Cloud: It is a network of remote servers hosted on the Internet to store, manage, and process data, rather than a local server. You can launch your resources and instances on cloud and connect to your servers. 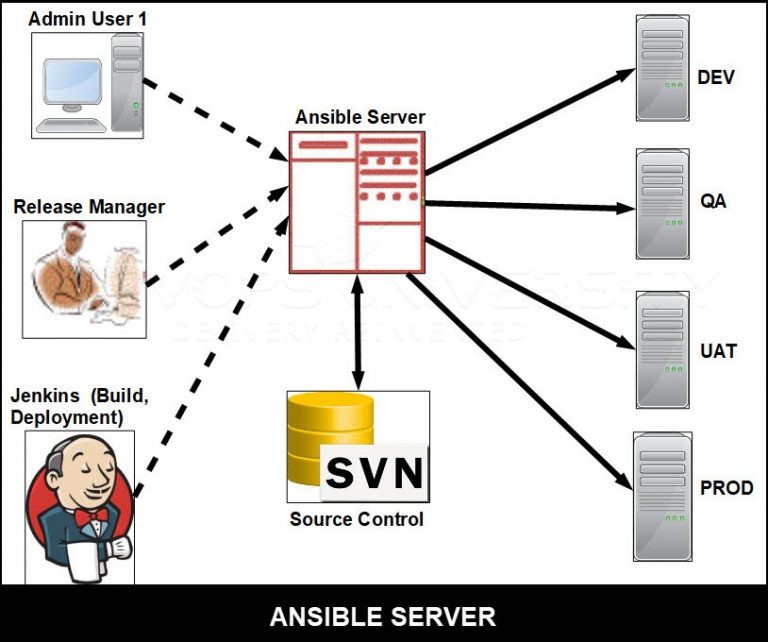 YAML
It is a strict typed language; so, extra care needs to be taken while writing the YAML files. Ansible uses YAML because it is very easy to understand, read and write when compared to other data formats like XML and JSON.
A YAML file starts with — (3 hyphens)
YAML represents data using simple key-value pairs using
key: value format. The space between : and value is a must.

You can also use abbreviation to represent dictionaries.

Representing List
To represent a list in YAML, every element (member) of the list should be written in a new line with same indentation starting with “- “ (- and space).
Example

You can also use abbreviations to represent lists.
Example

These help in reading and editing large lines.
In both the cases, indentation is ignored.

Boolean (True/false) values can also be represented in YAML where boolean values are case insensitive.
Example

Roles
In Ansible, the role is the primary technique to split a playbook into multiple files. Writing and reusing complex playbooks is simplified using roles. Breaking a complex playbook into logical smaller chunks promotes reusability across these components.
Each role is related to a particular functionality, and includes all the necessary steps to provide the desired result either within that role itself or in other listed dependent roles.

Roles and playbooks are not the same. Roles are small functionalities which can be independently used but have to be executed through playbooks. You can never execute a role directly.

Top-level playbooks are the connections between the lists of hosts from your inventory file to the roles that need to be applied to those hosts.

Creating a New Role
The directory structure for roles is important in creating a new role.

In the above example, a variable named tomcat_port is defined and assigned the value 8080.

Ad hoc commands are commands which can be run independently, to perform immediate functions.

These commands are of one time usage.

Some of the ad hoc commands and their usage is listed below:

There are two types of machines for deployment −

Note − Windows does not offer any support for control machine.

Ansible does not add any database nor does it require any daemons to start or keep it in running state. Ansible does not leave any software installed or running on the remote machines so there is no need to upgrade it when you want to move to a new version.

You can install the latest release of Ansible through Apt, yum, pkg, pip etc. Let us now see how to install Ansible on Ubuntu.

Now, let us install Ansible on a Ubuntu VM created on GCP. Once the VM is up and the connection is established. 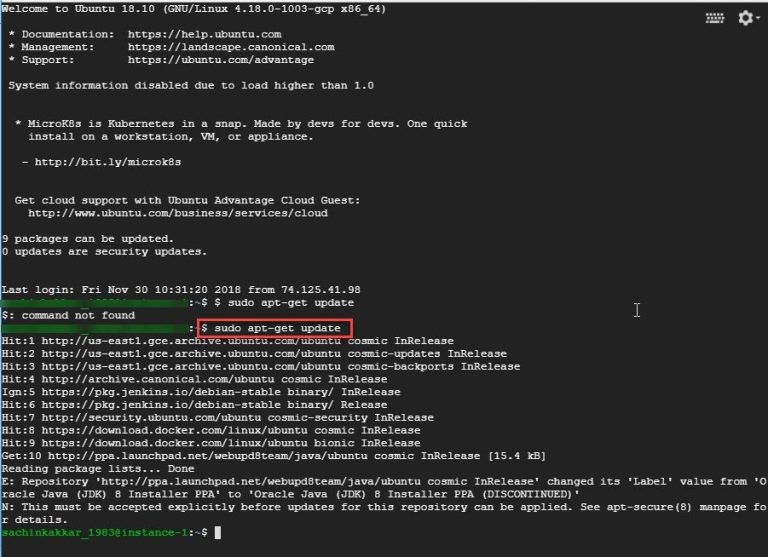 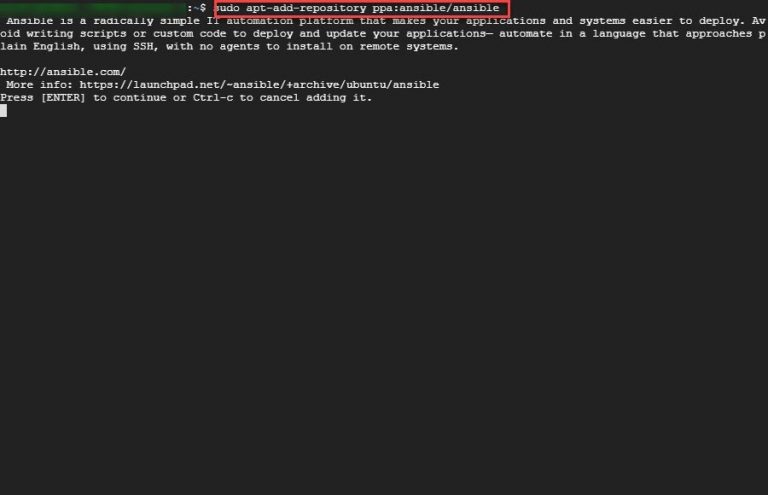 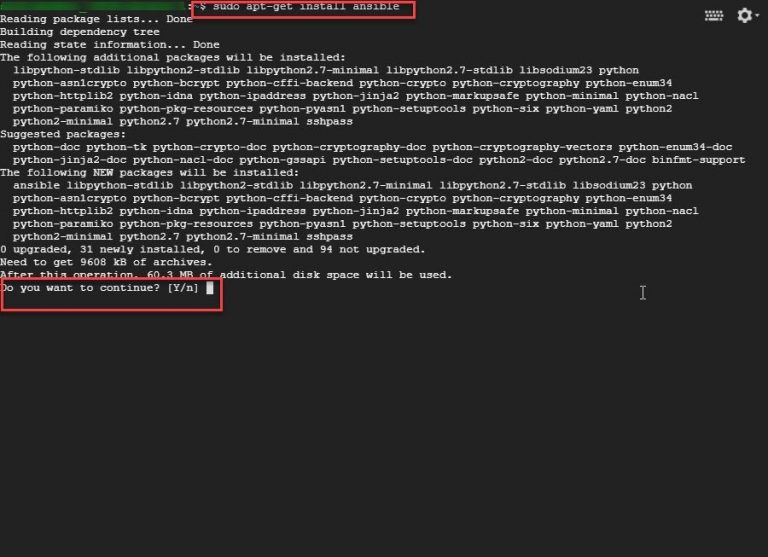 Step 4: You will see the below screen once you press Y 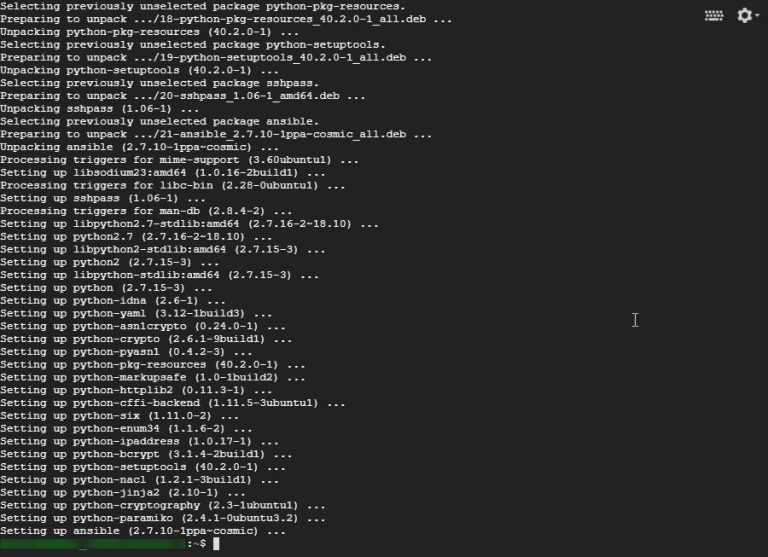 Step 5: To check whether Ansible is installed or not, run the command ansible –version 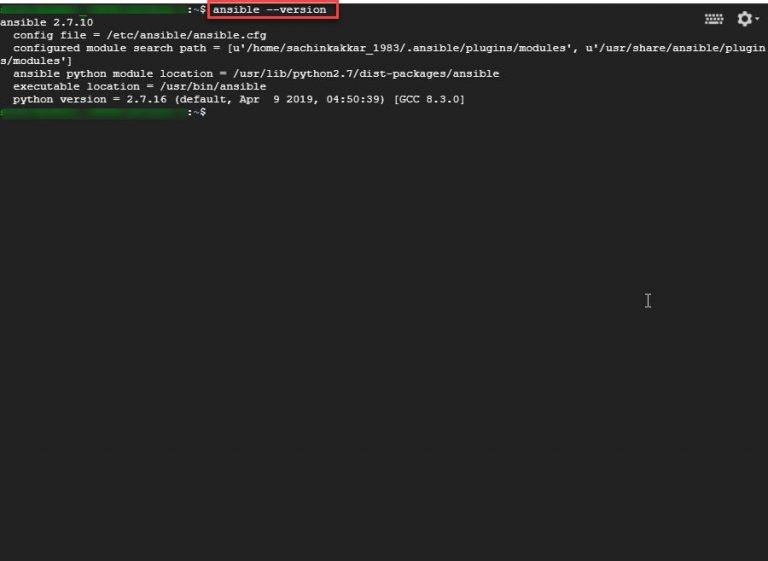 Ansible Tower (formerly ‘AWX’) is a web-based solution that makes Ansible very easy to use by IT professionals. It acts as a hub for all of your automation tasks.
Tower grants access control over resources and sharing of SSH credentials without transferring those credentials.

So, Ansible Tower is an exceptionally useful supplement to Ansible, capable of doing all what a CLI does. It complements the main application by automating and displaying the major tasks graphically – like dashboard-monitoring, for example. It is of great help to those who are new to Ansible as it acts as an easy-to understand visual tool. Though for playbook creation, Ansible’s CLI is still the best option available.

If you’re keen to become a DevOps professional and simplify your life by automating all your administration tasks, Ansible is a good choice to start with. With the learnings from this document on Ansible and configuration management, you get a good foundation to further build up on your knowledge and do more hands-on.