CICD is a term which is derived from two acronyms: CI and CD. CI stands for Continuous Integration and CD stands for Continuous Delivery/Continuous Deployment.
Continuous Integration is the process of frequently building and testing new code changes.
Continuous Delivery is the process of deploying new versions of an application frequently.
CI and CD together empower organizations to design and deliver high-quality software in shorter development life cycles and respond to the needs of the users promptly, resulting in greater customer satisfaction. 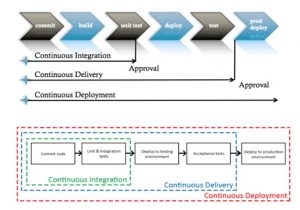 Continuous Integration and Continuous Delivery are often quoted as the pillars of successful DevOps. DevOps is a software development approach which bridges the gap between development and operations teams by automating build, test and deployment of applications. It is implemented using the CICD pipeline. Below image depicts DevOps in a nutshell. 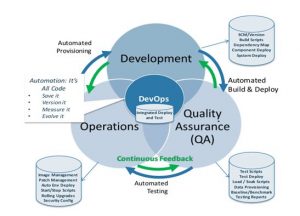 We can say, that, DevOps is about culture while CI/CD is mainly about the process and tools.  CICD enables us to make application changes more reliably as there is a consistent, reproducible pipeline for pushing new features to your users.

Let us first have a look at the important phases of DevOps lifecycle:

CICD enables the inclusion of freshly committed code into the code repository and facilitates testing at each stage — fulfilling the integration aspect — and ending it’s run with a deployment of the complete application to the end-users — fulfilling the delivery aspect.

Let us understand how a CICD Pipeline works and how each phase of DevOps cycle gets mapped to various stages in a CICD pipeline. We will discuss the important tools involved at each step, in parallel. 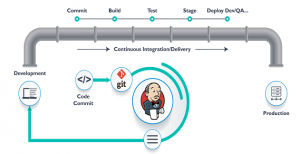 Now, let us have a look at each of the phases in detail:

Suppose, we have a Git repository where the development team commits the code, which needs to be compiled before execution. Git helps maintain the multiple versions of the code with appropriate version tags. Tracking changes or reverting to previous versions at any moment is extremely easy in Git. From Git, Jenkins pulls the code and then moves it to the commit phase, where the code is committed from every branch of the repository. Then Jenkins moves it into the build phase where the code gets compiled. If it is Java code, we use tools like Maven for code compilation. Jenkins is a front-end tool where you can define jobs/tasks. This whole process is called the build phase.

Once the build phase is over, then you move on to the Testing phase. where we have various kinds of testing done on the committed code. One of them is the Unit Testing where you test the chunk/unit of software or for its sanity test). These test cases are overseen by Jenkins again.

When the test is completed, you move on to the Deploy phase, where you deploy the product into a staging or a test server. To deploy, we will need a staging server which will replicate the production environment, I.e., Docker.

Docker is just like a virtual environment where we can create an entire server in few steps and deploy the artefacts to be tested. Docker is extremely popular as you can run the entire cluster in a few seconds.

Once the code is deployed successfully, you can run another series of Acceptance Tests or Sanity test for the final check. If everything is accepted, then it can be deployed to production.

At each step, errors can be reported to development team through mails so that they can fix them. They can fix the issues in parallel and push the updated code onto the version control system. Once they work on feedback and commit changes, the process is re-iterated from build phase.

The pipeline continues until we get a product or application which can be deployed in the production server where we measure and validate the code. Splunk, ELK Stack, Nagios etc. are some of the popular tools for monitoring.

This is a sequence diagram to show the working of a typical pipeline: 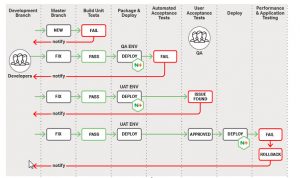 The three main principles that help build a well-assembled pipeline are:

For a successful CICD implementation, all stakeholders need to work in collaboration, taking complete ownership of their respective tasks and responsibilities, ensuring the integrity of application.

At each stage in the CI/CD pipeline, stakeholders are responsible to reduce risk ensuring complete quality control.

Automation is the key in CI/CD. It helps us to get feedback way faster on any newly developed features as the entire process is automated to achieve quicker deployment of functionality to users.

CHOOSING THE RIGHT TOOLS: IMPACT ON THE PIPELINE 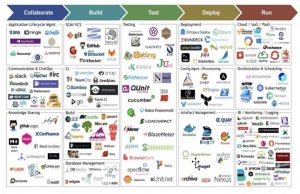 There are several considerations one must make while choosing the right set of tools:

It is best to have a tools strategy that adheres to a common set of objectives while providing seamless collaboration and integration between tools. The purpose is to automate everything.

Developers should be able to send new and updated software to deployment and operations effortlessly.

Pipelines if not implemented properly, can have a negative impact as they can affect the choices of tools to be used. We should optimize and substitute components in the pipeline as per our business needs.

Some of the highlights of a well assembled pipeline are:

Its rightly said “It is not the strongest of the species that survive, not the most intelligent, but the one most responsive to change”. It has become essential for organizations to embrace the world of DevOps and enable frequent delivery of good-quality software through CICD pipeline, to set themselves apart and have a cutting edge over others in the competition.

Our highest priority is to ‘satisfy’ the ‘customer’ through ‘early’ and ‘continuous delivery’ of ‘valuable’ software. CICD helps large organizations become lean, agile and innovative. The single most important piece of a solid deployment pipeline is that it is so consistent and reliable.

Continuous Delivery makes it feasible to continuously adapt software in line with user feedback, evolving trends in the industry and changing business strategies, through reliable and low-risk frequent releases.