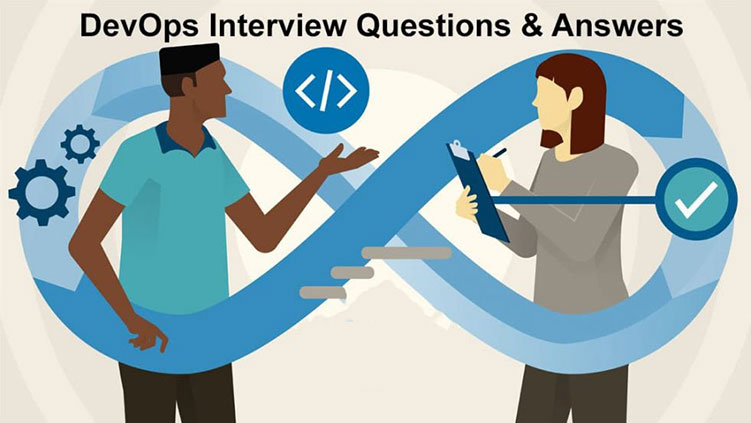 Q.1 What do you know about DevOps?

A.1. DevOps is a collaborative work culture, aimed to synergize the efforts of the development and operations teams to accelerate the delivery of software products, with highest quality and minimal errors.

DevOps is ‘re-org’ of the existing resources where continuous improvement is seeked through learning from constant feedback.

DevOps fulfils all the requirements for fast and reliable development and deployment of a software. Companies like Amazon and Google have adopted DevOps and are launching thousands of code deployments per day.

Q.2. Why has DevOps become so popular over the recent years?

A.2. Let us understand the impact of DevOps through some examples:

Netflix and Facebook are investing in DevOps to automate and accelerate application deployment and this has helped them grow their business tremendously. Facebook’s continuous deployment and code ownership models have helped them scale up and ensure high quality experience at the same time. Hundreds of lines of code are implemented without affecting the quality, stability, and security of the product.

Netflix is a streaming and on-demand video company which also follows similar practices and has fully automated processes and systems.

Facebook today, has 2 billion users while Netflix streams online content to more than 100 millions users worldwide. This is how DevOps has helped organizations ensure higher success rates for releases, reduce the lead time between bug fixes, streamline and continuously deliver through automation, and reduce their manpower costs.

Q.4. What is a version control system?

A.4. Version control systems(VCS) consists of a central shared repository where teammates can commit changes and maintain a complete history of their work. It gives developers the flexibility to simultaneously work on a particular artifact and all modifications can be logically merged at a later stage.

Version control allows you to:

There are two types of Version Control Systems:

Q.5. What is Git and explain the difference between Git and SVN?

A.5. Git is a Distributed Version Control system (DVCS) which manages small as well as large projects efficiently. It is basically used to store our repositories in remote server such as GitHub.

Its distributed architecture provides many advantages over other Version Control Systems (VCS) like SVN.

A.6. Continuous Integration (CI) is a development practice that requires developers to integrate code into a shared repository, each time they make a commit.

Hence, Continuous Integration as a practice forces the developer to integrate their changes every time so as to get an early feedback.

Q.7. What is Jenkins? What are the advantages of Jenkins?

A.7. Jenkins is an open source Continuous Integration tool which is written in Java language.
It keeps a track on version control system and to initiate and monitor a build system if any changes occur. It monitors the whole CICD process and provides reports and notifications to alert the concern team.

Q.8. Why are configuration management processes and tools important?

A.8. There are multiple software builds, releases, revisions, and versions for each software or
testware that is being developed in a CICD pipeline. There is a need for storing and maintaining data, keeping track of development builds and simplified troubleshooting. CM tools let you achieve these objectives.

The purpose of Configuration Management (CM) is to ensure the integrity of a product or system throughout its life-cycle by making the development or deployment process controllable and repeatable, thereby creating a higher quality product or system with consistent performance across environments.

Q.9. What is IaC? How you will achieve this?

A.9. IaC is programmable infrastructure, where infrastructure is treated in the same way as any other code. The traditional approach to managing infrastructure is hardly used in a Devops scenario as manual configurations, obsolete tools, and manual scripts are less reliable and error-prone.
IaC can be achieved by using the configuration tools such as Chef, Puppet and Ansible etc. These tools let you make infrastructure changes more easily, rapidly, safely and reliably.

Q10.Which among Puppet, Chef, SaltStack and Ansible is the best Configuration Management (CM) tool? Why?

A.10. Puppet is the oldest and most mature Ruby-based Configuration Management tool. Puppet has only some free features, while the prominent features are available in the paid version only. Organizations needing more customization will probably need to upgrade to the paid version, to use Puppet for CM.

Chef is also written in Ruby includes free features, plus it can be upgraded from open source to enterprise-level if necessary. On top of that, it’s a very flexible product.

Ansible is a very secure option since it uses Secure Shell. It’s a simple tool to use and it does offer a number of other services in addition to configuration management. It’s very easy to learn, so it’s perfect for those who don’t have a dedicated IT staff but still need a configuration management tool. Ansible is the only CM tool which is agentless and does not need any additional software installed on remote machines, which makes it the most favoured choice.

SaltStack is python based open source CM tool made for larger businesses, but its learning curve is fairly low. 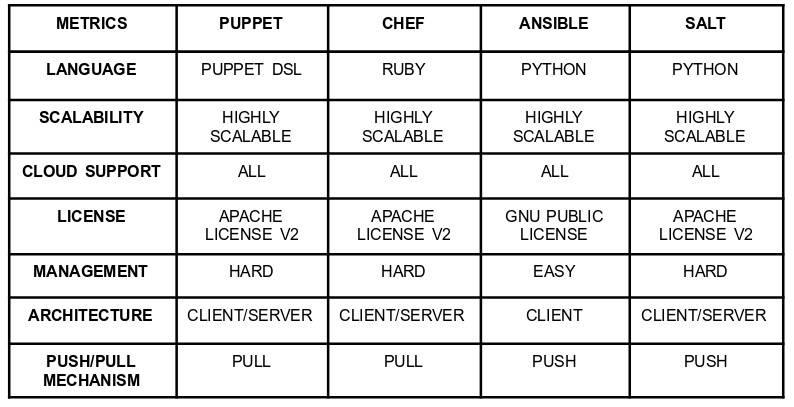 A.11. Ansible is a software configuration management tool to deploy an application using ssh without any downtime. Ansible is developed in Python language and is mainly used in IT infrastructure to manage or deploy applications to remote nodes.

If we want to deploy one application in 100’s of nodes by just executing one command, then Ansible is the one agentless tool which provides you this ability seamlessly.

Q.12. What are playbooks in Ansible?

A.12. Playbooks are Ansible’s configuration, deployment, and orchestration language. They can describe a policy you want your remote systems to enforce, or a set of steps in a general IT process. Playbooks are written in a human-readable, easy to understand text language.

Q.13.What is a Docker container? How do you create, start and stop containers?

A.13. Docker is a containerization technology that packages your application and all its dependencies together in the form of Containers to ensure that your application works seamlessly in any environment.

A container consists of an entire runtime environment: an application, plus all its dependencies, libraries and other binaries, and configuration files needed to run it, bundled into one package.

Containerizing the application platform and its dependencies eliminates any infrastructure differences and maintains consistency across environments.

They share the kernel with other containers, running as isolated processes in user space, on the host operating system.

Docker containers can be created by either creating a Docker image and then running it or you can use Docker images that are present on the Docker hub.

We can use Docker image to create Docker container by using the below command:
docker run -t -i <command name=””></command>

This command will create and start container.

Docker container can be run in two modes:

Attached: Where it will be run in the foreground of the system you are running, provides a terminal inside to container when -t option is used with it, where every log will be redirected to stdout screen.

Detached: This mode is usually run in production, where the container is detached as a background process and every output inside the container will be redirected to log files which can be viewed by docker logs command.

To check the list of all running containers with status on a host:
docker ps -a

To restart the Docker container you can use:
docker restart

A.14. A Dockerfile is a text document that contains all the commands a user could call on the command line to assemble an image.
Using docker build users can create an automated build that executes several command-line instructions in succession.

A.15. Docker image is the source of Docker container. Docker images are used to create containers. Images are created with the build command, and they’ll produce a container when started with run. Images are stored in a Docker registry such as registry.hub.docker.com.

A.16. Docker hub is a cloud-based registry service which allows you to use pre-defined images, build your images and test them, store manually pushed images, and provide a link to Docker cloud so that you can deploy images on your hosts.
It provides a centralized resource for container image discovery, distribution and change management, user and team collaboration, and workflow automation throughout the development pipeline.

Q.17. What are the advantages that Containerization provides over virtualization?

A.17. These are the advantages of containerization over virtualization:

A.18. Nagios is used for Continuous monitoring of systems, applications, services, and business processes etc. in a DevOps culture.
If a failure occurs, Nagios has alerting ability to inform the technical staff about the problem, allowing them to begin remediation processes before outages affect business processes, end-users, or customers. With Nagios, you don’t have to explain why an unseen infrastructure outage affect your application’s performance in production environment.

By using Nagios you can:

Q.19. What is NRPE (Nagios Remote Plugin Executor) in Nagios?

A.19. The NRPE addon is designed to allow you to execute Nagios plugins on remote Linux/Unix machines. The main reason for doing this is to allow Nagios to monitor “local” resources (like CPU load, memory usage, etc.) on remote machines. Since these public resources are not usually exposed to external machines, an agent like NRPE must be installed on the remote Linux/Unix machines.

Q.20. How do all the automation tools work together in a CICD flow?

A.20. In a CICD pipeline, everything gets automated for seamless delivery. However, this flow may vary from organization to organization as per the requirement.

A generic DevOps flow would be: