How Is Python Used In DevOps? 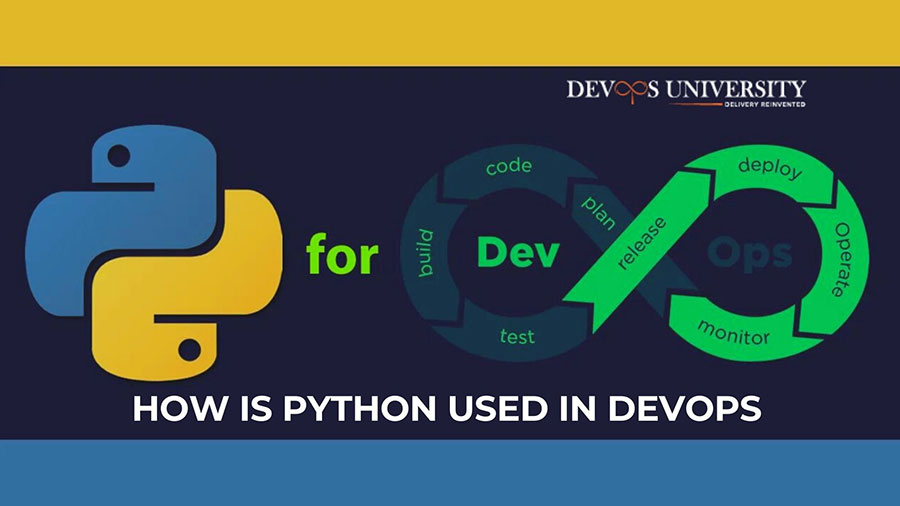 Because functional and infrastructure changes are challenging to manage, they occur independently, resulting in numerous downtimes, unnecessary obstacles, and bugs and errors due to human intervention. The application development team may run its functions on a compatible platform. The testing team may test on their platforms. Finally, the platforms are different for production deployment, which is a nightmare for the application development team. The operations team, which manages its infrastructure, has a different perspective and faces its own set of challenges in maintaining an unsuitable platform for application hosting.

DevOps is a term that guides the combination of software development and operations. This method enables a single team to manage the entire application lifecycle—from development to testing, deployment, and procedures. DevOps assists in bridging the gap between software developers, quality assurance engineers (QA), and system administrators.

Python is a popular programming language among DevOps teams. Python’s flexibility and accessibility make it an excellent choice for this job, allowing the entire team to create web applications, data visualizations, and custom utilities to improve their workflow. In addition, python’s programming-friendly and extensive libraries make automation a breeze. As a result, Python is used in DevOps and has become the de facto language for DevOps automation.

Effective ways to use Python in DevOps

Python allows you to do anything in DevOps. The main areas of focus are Python-based automation of DevOps life cycle management. For example, Python can be used to automate the CI/CD pipeline. The following are the best ways to use Python for DevOps-

Python and DevOps (combo) can be used in tandem to create next-generation solutions. As a result, you can make an application, work with diverse cross-functional teams, work across multiple platforms, and provide an excellent user experience.

Efficiency
When it comes to efficiency, this combination goes hand in hand. The code is written using best practices, processes, and patterns, resulting in remarkable efficiency. Efficiency is guaranteed when it comes to Python as a coding language and DevOps as a practice. To improve quality and customer satisfaction, efficiency must be improved over time. Efficiency is not a result but rather the result of consistent practice.

Adapt to Changes
DevOps fosters an organizational attitude of rapid adaptation to change. The key things that organizations must be readied to embrace and adapt to are changes in everything, such as customer demands, market changes, business changes, and technological changes. Therefore, change management and execution should be the motto of every company in the world. Python in the DevOps culture aids in the creation of scalable, adaptable, and flexible applications through efficient and effective processes.

Excellent pairing
DevOps and Python are not at the end of the road but have many more years to build applications, automate tasks, increase productivity, efficiency, and quality, and meet ever-changing customer expectations.

Syntax and libraries
Python’s great syntax and vast libraries help make scripting, automation, and programming simple and accessible in the DevOps field. It assists organizations in embracing change, automating deployment and development, and dealing with complex challenges in a secure, streamlined, and simplified manner.

Why Python is necessary for DevOps?

Python automation scripts are platform-independent and support multi-tool integration, making them appear to be a better option. The following are some of the main bases why Python is essential for DevOps-

How is Python used in DevOps?

Automation is the ultimate objective of DevOps, so Python implementation in DevOps processes is critical. Python makes writing simple scripts that can automate essential DevOps processes. Among these tasks are the following:

Monitoring
Python allows you to create scripts that automate simple day-to-day monitoring tasks and even send notifications and alerts if there is a problem with the system. Use Python libraries such as psutils, a cross-platform lib for process and system monitoring, and one of the many network traffic monitoring libraries developed by the Python community example Scapy. You will have a monitoring system that you can code from scratch and adapt to your needs.

Pipelines for CI/CD and Configuration Management
Python is also used to automate continuous integration and deployment. For example, python makes it simple to write simple scripts that automate the CI/CD pipeline, making it easier and less error-prone. Don’t forget that the most valuable and well-known DevOps tools are written in Python; examples include Ansible and SaltStack.

Python is a simple language with an extensive and customizable library and one of the most active user communities. DevOps as a process necessitates some level of coding to ensure that its principles are implemented correctly. Python is one of the preliminary technologies used by DevOps professionals and teams. Python offers flexibility and accessibility in this process, making it an excellent choice for DevOps tasks. Improved, simple, but sophisticated custom utilities enable DevOps professionals to build, test, deploy, visualize, and monitor the DevOps lifecycle.