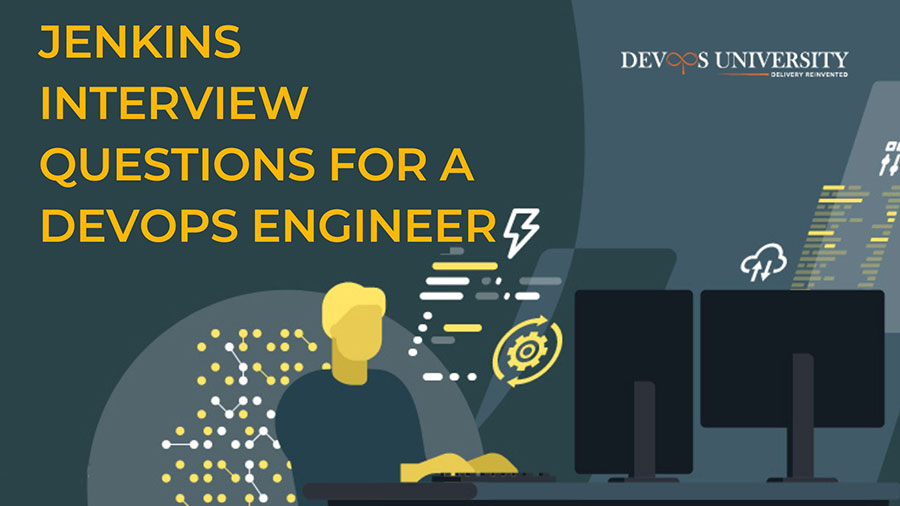 Jenkins is an open-source, self-contained automation server that can automate various operations related to software development, testing, and delivery or deployment. Jenkins can be installed via native system packages, Docker, or even run solo on any machine with the Java Runtime Environment (JRE).

Developers can easily integrate modifications to the project with the help of the tool. Jenkins’ main goal is to keep track of the version control system and, if necessary, to start and supervise a build system. In addition, it monitors the entire process and sends out data and notifications to keep you informed.

Jenkins is commonly used for a variety of purposes, including:

Q1 What is Jenkins, and why it is used?

Jenkins is a popular open-source continuous integration software. This tool’s primary job is to maintain track of the version control system, monitor the build system, and send out notifications and reports to inform users. In addition, it integrates with various testing and deployment systems, allowing you to distribute software.

It is mainly used because of the following reasons-

Q2 What is the purpose of Jenkins?

Jenkins is a DevOps tool designed in the Java programming language for continuous integration and delivery (CI/CD) and is used to automate several software development processes. For example, Jenkins allows developers to test software projects so that they can incorporate improvements continually. In addition, Jenkins’ built-in plugins make continuous integration and delivery easier.

Q3 What is Jenkins’ continuous integration?

Continuous integration is integrating all development work as soon as possible and continuously testing code following a commit. This method enables the early detection and correction of bugs. The Jenkins build server provides this feature.

Q5 What exactly is Groovy?

Apache’s Groovy is a powerful, dynamic and optionally typed Java platform language. Jenkins uses it as its native scripting language. In addition, Jenkins has enhanced with unique interfaces and dynamic and reliable build reports thanks to Groovy-based plugins.

Q6 What do you need to get started with Jenkins?

Q7 List a few of the benefits of using Jenkins

Jenkins is known as the heart of the DevOps pipeline. Here are some of Jenkins’ most significant benefits:

Q8 What is a Jenkins Pipeline, and how does it work?

Jenkins Pipeline is a set of Jenkins capabilities installed as plugins to enable the implementation of a continuous delivery pipeline. These automated steps take software from source control to end-user deployment.

Jenkins saves all of its settings, builds artefacts, and logs in its home directory; copy this to generate a backup of your Jenkins configuration. You can also clone or replicate a task by copying or renaming the directory.

Q11 Mention the steps included in a Jenkins pipeline

Building a project from source code, running it through several units, integrating, testing for user approval and performance, and eventually deploying the packaged application on an application server is part of a Jenkins pipeline.

As a result, the steps in a Jenkins pipeline are as follows:

Q12 What is the Jenkins security procedure?

The steps are as follows:

Though these aren’t all of Jenkins’ stuff, we sought to cover some of the most often asked basic Jenkins interview questions. We also need to be aware that the Jenkins Update Center contains thousands of useful plugins that extend Jenkins’ supported functionality. Install a Jenkins Server on any supported platforms – either locally or in the cloud – and the most common plugins before attending an interview (suggested by Jenkins itself & other commonly used plugins). If you have any more questions or queries on Jenkins, please leave them in the comments section below, and we will reply as soon as possible.